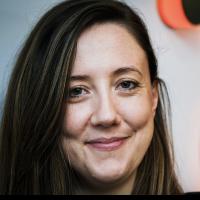 Last Wednesday I grabbed one of the few remaining train seats north from London Euston for two nights in Glasgow. Once on the ground, I was struck by the physical imprint of the conference, which sprawls far beyond just the official convention centre.

From the moment of arrival at Glasgow Central – it was clear that COP26 had taken over! Banner ads strewn throughout the concourse. A number of protestors and activists – all relatively calm, but standing or sitting in the streets with messages calling for faster action. You see a region bursting at the seams – I stayed at a pretty lodge 10 miles outside of the centre, and had to be ferried in each day by Gary, a friendly Glaswegian  who was drafted into service as a temporary driver due to taxi shortages.

And then there’s the two major areas of action for the conference. I spent most of my time in the Green Zone, the community engagement center. (Not being a politico or Greta Thunburg, the Blue Zone for delegates was off-limits, although we did manage to blag a pass for the Green Finance Summit hosted in the South Rotunda – a uniquely circular building halfway between the two locations on the River Clyde.)

Walking around, the sheer scale of what’s on offer is impressive. Millions of pounds of green arches, temporary installations and lightning are on display, not to mention the hefty fees organizations paid for placement in the hall. This was the source of much caterwauling before the event, and it’s clear that brands cared how and where they appeared at the conference.

There was a surprising diversity in the types of companies represented – from oil and gas majors, FMCG conglomerates, supermarket groups, banks and technology companies. They were here and clearly had made a serious investment. This was more impressive and built out than the major financial conferences I’ve attended such as Sibos and Trade Tech.

The scale of commitment on signage and press release ratchets up the expectation for action. Firms need to be cognizant that they risk widening the ‘say-do gap’ with their investments. People, including the global press corps, are making note of what was said and who said it. They will be checking work in the months and years to come – ensuring there’s alignment between attitudes and action when it comes to addressing sustainability. It matters.

Hypocrisy is an easy headline. Look at the furore around delegates and politicians who took planes to Glasgow, including complaints around private jets. These optical nightmares distract from the larger message – but are also completely inbounds as journalists try to maintain their accountability.

A related issue is whether the large presence of corporate brands overshadowed plans to include all stakeholders. COP President Alok Sharma said that “this should be the most inclusive COP ever,” but has this happened? There were 30,000 delegates this year, but walking around it was clear certain constituencies were overrepresented while others were barely here or totally absent.

The communications industry has a critical role to play in the conversation before, during and after the summit. It’s really come to the fore how critically important this is during COP26. As communications professionals, we need to ask some difficult questions about the way we use language and develop ESG narratives for our clients.

Ultimately the conference will boil down to another area we are very familiar in when it comes to communications – metrics. What are they and have them been met? One goal clearly stands above the others – a commitment to keeping global warming above 1.5 degrees above industrial levels. Everything else, no matter how elaborate or elegantly designed, is ultimately a bit of a sideshow.

I left Scotland – on another packed train – with an overriding sense of optimism and hope. There are a lot of incredibly smart people working hard to address this – the solutions are there. Our role of communicators will both be to show the way forward, and also ensure our clients and industry maintain their end of the bargain.

Kirsty Howe is an associate director based in London