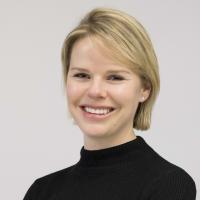 Networking. The thought of it used to give me anxiety.

Going to a conference, industry gathering, or debate on the real-life applications of blockchain is the easy bit. But it’s the bits before, between and after – the ‘networking breaks’ or the ‘meet and greets’ I tended to avoid.  Being in a room full of strangers and having to essentially force yourself on them to see if you might have anything in common professionally or be able to connect in some way.

Being of a naturally quite shy disposition (and awkwardly British), my default was to think that nobody would be interested in who I was, what I did or why I was attending this breakfast briefing, lunch and learn or fireside chat....’ No matter how many ‘how to be a better networker’ or ‘top tips for working the room’ articles I read, I couldn’t shake the awkwardness.

But I got tired of going along to events as a passive attendee. II felt greedy for attending a panel on the future of asset management, gorging on the thought leadership and experience of the panellists and then sneaking off, laden with their juicy insights. It got increasingly frustrating that, yet again, I hadn’t been able to ask that burning question when I had the chance to my favourite journalist or taken a chance on challenging the Fintech start-up co-founder on his statement that the such-and-such company would be “the next Google” in 18 months.

So I started to put my hand up. I loitered near the coffee (or wine,) stand, and asked the nearest stranger what possessed them to forego Love Island to listen to yet another Brexit debate. I tried this at numerous events in both London and New York, where I have recently returned from secondment.

Here’s a few observations I have made, and a few tips that I have picked up for networking and attending events on both sides of the Atlantic.

So be an active attendee. Events aren’t going succeed without engagement. Don’t be shy. You’ll quickly realise that other people standing awkwardly will be relieved that you approached them and opened the conversation. You could come away with a new prospective client, helpful industry intel, a heads up on the latest journalist moves or a new contact for someone else within your network.

And at the very least, you’ll have met someone new and learnt something interesting, which is always time well spent.

Claire Rumbellow is now back in London after two secondments in New York. She is an Associate Director in London – also known as a Vice President in New York.