Ho! Ho! Ho! Welcome to our first Christmas Chronicle – where we discuss how technology will disrupt our lives in the year to come.

Voice search: A passing craze, or the future?

There has been plenty of postulation regarding the rise of voice search recently, particularly with Comscore’s prediction over the summer that 50% of all searches will be made using voice by 2020. But how seriously should we take it and what can brands do to react to this changing behaviour?

As of January th 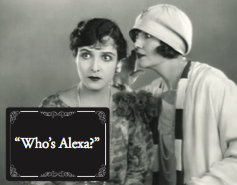 is year, there were already an estimated one billion voice searches being made per month on mobiles and smart speakers. Still most popular with millennials, Generation Z is close behind as the first to grow up with voice search – from singing nursery rhymes with Alexa to turning your lights on with Google Home. This represents a huge shift in how people find and consume information, with brands now needing to seriously consider how voice fits into their digital strategies.

The good news is, while the technology is still developing, optimising for voice search is not so different from traditional SEO. Write useful and digestible content for your audiences that answers their questions, while making good use of semantics and Schema.org mark-up to direct search engines to the most relevant information. Additionally, consider developing Alexa Skills or Google Actions – a relatively new and open playing field presenting an opportunity to claim share of voice on these devices.

“We expect voice search behaviour to keep changing as consumers get more comfortable with it, and as the technology evolves. Brands need to build it into their communications strategies now, to lead the wave of change – rather than retrospectively reacting further down the line.”

Getting personal... How business leaders can use Twitter to influence conversations.

Twitter has long been effectively utilised by brands as a channel to support media relations, from engaging with journalists to retweeting news and even pitching via DM. There is often more reluctance, however, on the part of business leaders when it comes to actively engaging on the channel. According to Forbes, 61% of Fortune 500 CEOs have no presence on Twitter at all. This leaves a clear gap – for those who are willing to participate.

Let’s take former Goldman Sachs CEO Lloyd Blankfein as an example. Blankfein is one of the most distinctive FS leaders active on Twitter and has tweeted 43 times. He keeps to big picture topics and trends, from Brexit to congratulating the outgoing CEO of GE, rather than the riskier territories of industry developments, company news or performance (see also: “Musk, Elon”). With 98,000 followers including the media, industry peers and economists, his reach is relevant and effective beyond the channel; six of his tweets have been quoted in the FT, and no doubt elsewhere. And this is not an isolated result: if you search the phrase “wrote on Twitter” in the FT, it returns just under 300 results from the last couple of years.

So how should other business leaders be using Twitter in order to influence conversations in their industries? First it’s important to invest and build a relevant following. Twitter can become a powerful news distribution feed – if journalists are following you. So follow them back, as well as analysts, influencers, industry peers and commentators. Personality gets engagement, and coverage: develop a credible and authentic tone of voice that is true to you and have things to say that are relevant to your industry or role. Identify where you can build authority, but also give audiences a glimpse into what makes you tick. This will not only resonate with the media, but across all of your online audiences.

“Commenting in 280 characters forces brevity, ensuring opinion but leaving room for subtle ambiguity, while pro- viding reporters with ready-to-go quotes. In wise hands this can be a clever – and even less-dangerous – format to supplement more formal, brand-level media engagement.”

Are you influencing the right influencers?

Traditional ways of reaching and engaging with customers are under attack. Ad blockers (used by an estimated 12.2 million internet users each month) shield consumers from targeted promotions, new data privacy regulations have made it easier than ever to opt-out of branded communications, and there is vast amounts of content shared across a growing plethora of channels every day. So how do you make sure you reach the right audiences?

B2B influencer marketing is not a new concept, but we have seen it take an increasing share of budgets in 2018 thanks to improved and measurable ROI. With the right strategy and tracking in place, influencer marketing can be used as an effective tool to drive new business and ultimately revenue growth. In a recent study by Augure, 75% of professionals said they consider influencer engagement to be effective both in generating new leads and in winning customer loyalty.

The key is identifying and engaging with the right influencers for your business and audiences. Look at current profiles and activity, as well as validation from other leading influencers, to make an informed decision. Once you’ve established that relationship, it’s about the content you give them to share with their networks. Finally, establish both qualitative and quantitative metrics in order to measure success and prove the value of influencing the right influencers.

“Imagine some of the biggest names in your industry were discussing the benefits of your competitors’ offerings, shaping industry conversations or expressing an opinion on your brand. Wouldn’t you want them on your side? In a crowded content landscape, working with influencers to engage with your target audiences is a powerful tactic to consider.”