To most passerby, the street-side advert wouldn’t merit much interest.

There’s a monochrome, off-center perspective of tree rings, along with the main text: “Climate change doesn’t do borders.” A second sentence goes on to describe how HSBC is helping plant two million trees.

But not everyone agreed with the message of the article. After receiving 45 complaints, the Advertising Standards Authority in the United Kingdom declared that the bank had misled customers.

The problem was that highlighting select efforts on climate change gave a distorted picture of the bank's overall impact on climate change. Particularly problematic were the bank’s continued financing of fossil fuels, providing more than $78 billion in funding since the Paris Agreement was signed in 2016.

The authority found that customers did "not expect that HSBC, in making unqualified claims about its environmentally beneficial work, would also be simultaneously involved in the financing of businesses which made significant contributions to carbon dioxide and other greenhouse gas emissions and would continue to do so for many years into the future." 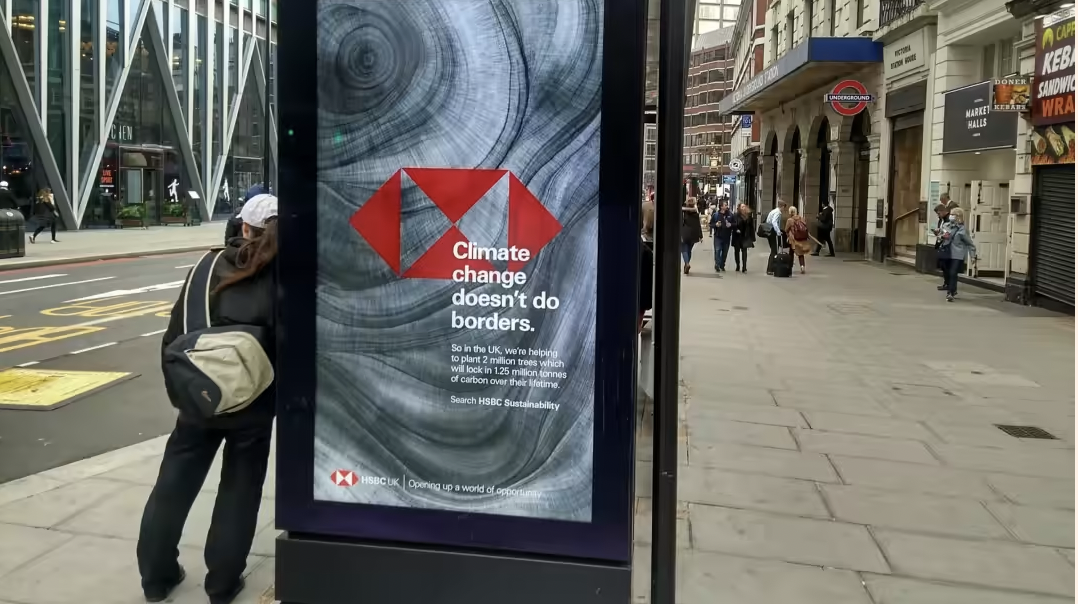 Part of a broader crackdown

The advertisements have been banned, but that’s clearly not the end of the story. This is a message and warning; a clear sign that there will be enhanced scrutiny of advertisements around climate change.

There’s no reason why this necessarily will stop at out-of-home conversations, certain social media and influencer communications fall under the purview of the ACA. And the action is Britain certainly has the potential to spurn action elsewhere.

This comes as part of a broader move to prevent “greenwashing”. The Financial Conduct Authority this month proposed a broad package that will place a number of restrictions on how terms such as ‘ESG’, ‘green’ or ‘sustainable’ can be used. The commentary period is now open, and the FCA expects to publish new rules in the middle of next year.

The Competition and Markets Authority, meanwhile, teamed up with other global authorities and found that 40% of green claims made online might be misleading. Last year it published a Green Claims Code, designed to help firms ‘get their green claims right’.

Resist the urge to burrow underground

The CMA provides a framework to help ensure that businesses don’t go too far in promoting their green credentials. The code implores businesses to make claims that are truthful and accurate, along with being clear and unambiguous. They also must not ‘omit or hide important information’ – this is where HSBC went astray. Comparisons must be ‘fair and meaningful’ with the full lifecycle of the product under consideration.

These may seem onerous, but this leaves plenty of room for companies to have fair and open discussion about a company’s commitment to green initiatives. Close collaboration between marketing, legal and compliance departments is important; certainly it’s not an area where something can be dashed off in the course of an afternoon.

If a brand is finding it hard to make claims that meet these standards, however, this might be a sign that firms need to consider doing more. A tightening regulatory climate may be the catalyst that pushes firms towards action, whether that means stopping funding of carbon-emitting businesses or refining its overall product set.

As the green economy becomes larger, it is not surprising that we are seeing more scrutiny. Society as a whole understands the vital stakes and will be looking for accountability from brands that suggest they are part of the solution.

So expect more bus station adverts on green issues, but be warned, the claims might be more nuanced than before.

Jon Schubin is a director based in London. You can read more about Cognito’s sustainability practice here.

‹ Previous
Short of time? Three things about COP27 and how communications activity can galvanize corporate action
Next ›
Offsite and offline: Cognicon ‘22