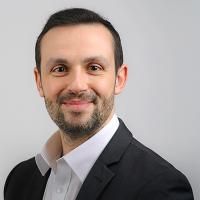 Now in its fifth year, Finovate Europe returned last week to The Old Billingsgate Market, in the City of London, bringing together the fintech community to help foster innovation within financial services. 72 startups (an increase of 12 since 2014) took to the stage over two days to try and impress a packed crowd with their latest innovations. The audience, made up of 1200+ delegates comprising of fintech VCs, bankers, journalists and analysts, watched with anticipation expecting to find the next big thing.

Each startup bared their soul to the audience, with just seven minutes to pitch their solution and no time for Q&A, pre-prepared slides or pre-recorded videos. The organisers were strict on time: even when the IT or audio failed, once the seven minutes were up, the presentation was complete.

From sitting through the majority of demos it was clear to me that mobile payments, social trading, identity & security, personal finance management and crowdfunding were the key topics of the event, which didn’t seem to come as much of a surprise to the crowd. The use of a mobile phone and overhead camera was the favoured presentation technique, with many of the demos similar in style. Some companies used the somewhat ‘old fashioned’ technique of role play, which didn’t come across well and made the audience harmoniously cringe.

While speaking to the journalists it was interesting to find out what they were looking to get out of the event and what they expected from the companies. Although there were only 15 journalists that attended, they were from a range of key publications that everyone wanted to talk to, such as the FT, The Banker, Finextra, Tech City News, Financial News, and American Banker to name a few.

Here are five things to keep in mind when meeting or interacting with the media at events like this:

Journalists at events don’t have time to set up loads of one-to-one meetings as they want to get a feel of what’s on offer and have choices on the day. However some will book a short 10-15 minute meeting in advance, as long as it takes place in an event break. Events are an opportunity for journalists to meet new people, have a quick introduction and find new story angles. If the journalists are keen, stay in touch and arrange a more detailed meeting post event.

Think about the publication and tailor your story, where possible. If you only have 15 minutes to interview then make it count. Don’t try to give all the details: choose the three most interesting points and ensure you get them across.

Out of all the demos, there were some startups that stood out, such as InvestUp, Avoka and Coinjar (the youngest presenter who started his company at 17). What worked for them and resonated with the audience was the passion they delivered, about their product and company, and were able to push their USP so everyone actually knew their offering.

With journalists trying to maximise their time and the volume of people they meet, get to the point and do it quickly. Prepare a media one pager, telling your story and capturing the most salient points, in short form. Journalists don’t want to read an essay! Again, remember you want to engage with the journalists so make it interesting.

Some of the journalists felt that the presenters were trying to get too much across in their seven minutes.  So keep it brief and sum up the key details: start with the problem you are solving, the audience you are addressing and how your solution can help address the problem.

4. Be prepared to be filmed

More and more publications are changing the way they report on news, and video is now playing a significant role. Several journalists come with a camera in hand or an entire camera crew to film onsite, so be prepared to get in front of a camera at a minutes notice, ensuring you can get your USP across. Video training prior to the event is recommended to practice what you want to say and help to deliver your three key messages succinctly.

5. Use social media to amplify the message

Social media is essential for events like Finovate and was surprising to me that at such a large fintech event there were still several companies that didn’t have a Twitter handle, so make sure you have a presence on Twitter, both in the lead up and after the event. Follow all the journalists that have signed up to attend and interact with them throughout the event. They are likely to pay more attention if you are commenting on the event, venue, speakers, and topics. They’re more likely to want to engage with a company that is already engaged in the industry.

‹ Previous
Digital Advertising Trends for 2015
Next ›
Looking forward to the Year of the Goat, and Sibos coming to Singapore