My LinkedIn post on Netflix’s results last week got over 121,000 impressions. That’s several times my highest impressions from a post to date, so I’m keen to understand why that happened, how to replicate it again, and more importantly how our clients can also maximise their posts.

This particular post was written in five minutes: it was not detailed or original.  I simply said that a 32% fall in the Netflix stock price, on weaker subscriptions, made a mockery of the scale of investment research and active management on Wall Street covering a big stock like that.

Unusual and striking was that the impressions on the second, third and fourth day were all higher than on the first.  This is all about how the LinkedIn algorithm works.

Whenever you post, LinkedIn labels the post as “spam,” “low-quality,” or “clear” in near real time. If you make it through the spam filter, you enter what’s often called ‘the golden hour’. LinkedIn measures initial engagement with your content to determine if it’s worthy of moving on into other’s feeds. If you have a good ‘golden hour’ then your post is most likely to stay in circulation, and keep gaining momentum.

As a post gathers audience, LinkedIn continuously predicts whether it likely to go viral. It monitors the network reach of the original poster, members interacting with the content, and signals like the velocity of likes, shares, and comments.  Its “virality predictors” aim to block spam/low-quality content going viral and cluttering the feed, while higher-quality content will appear more widely in people’s news feeds. It is worth noting that engagement isn’t all equal: a share or comment, for example, is worth more than the more passive like of a post in determining its quality. 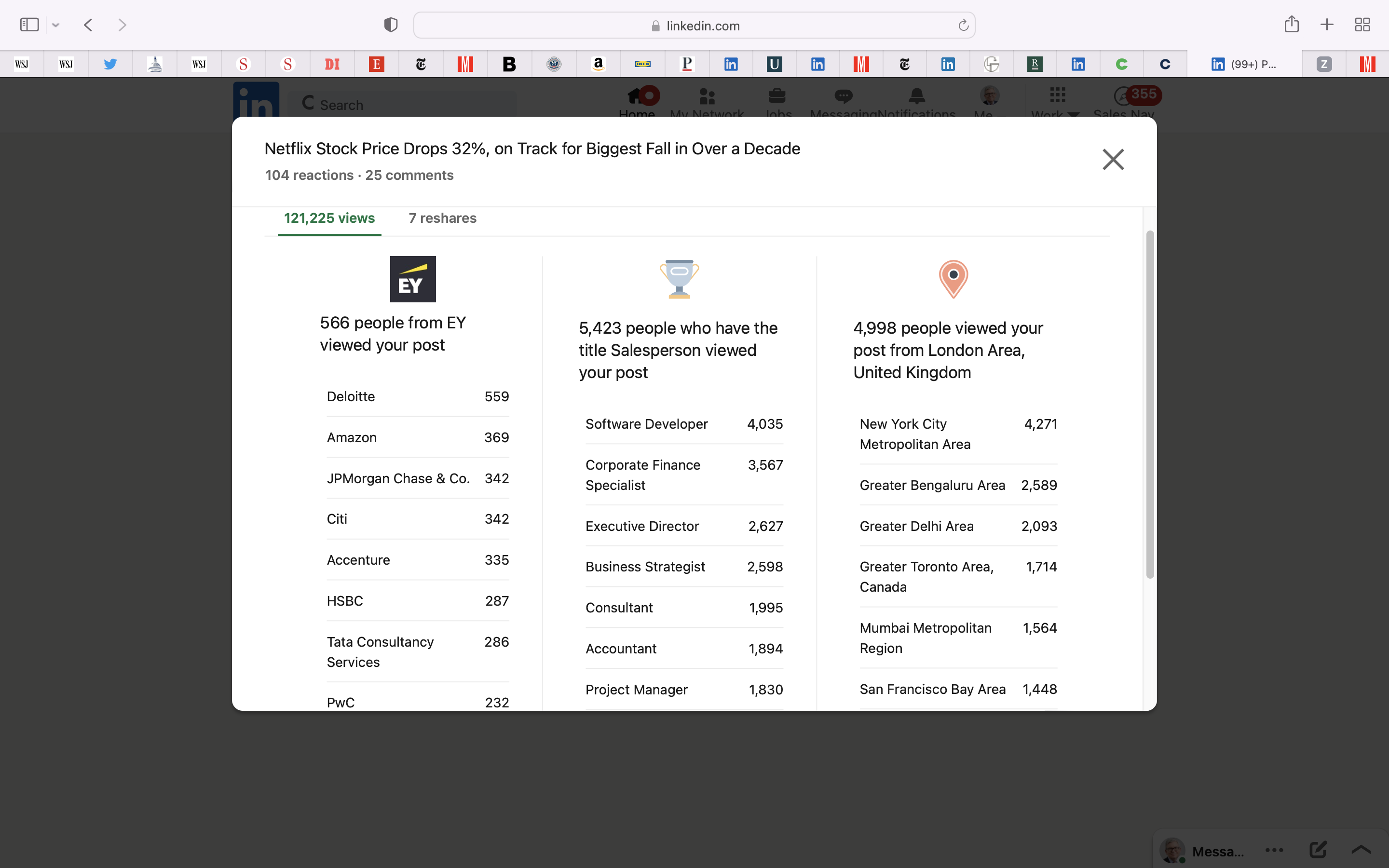 If the LinkedIn algorithm classifies the post as “clear”, it will cycle a post until engagement slows down.  The algorithm continually assesses whether the post is “clear”, so that a post could in theory be classed as 'clear', but then become 'spam'. Conversely, a “low quality” or “spam” piece could gather enough momentum that it gets reclassified to 'clear'. Some top content is then selected for manual review: in contrast to many other social platforms, human editors have the power to decide whether your content will be displayed even more widely on the platform, or if it will plateau as is.

Engagement on this post was good, but did not rise in line with impressions: the post got about 105 likes and 25+ comments.  I’ve had posts with many fewer impressions that have done better on comments.

What happens when a post goes (mini) viral is quite interesting.  As many will know, LinkedIn analytics (see below) can show you the top ten job titles, top ten companies, and top ten geographies.  Main takeaways on this:

Most of the time, anyone using LinkedIn as a business tool should focus on high quality content that reaches the specific audience you care about.  But the occasional post that reaches a much wider audience and grows your profile can’t hurt either.

Andrew Marshall is Cognito's vice chairman based in New York. He has more than 5,000 connections on LinkedIn

‹ Previous
What I learned in “The Bahamas” – Why Twitter Spaces may succeed when Clubhouse failed
Next ›
Telegram is where millions get their news. Should you?