A note from the editors

Over the past two months we’ve published a weekly snapshot of how the worlds of finance and technology are responding to the pandemic. This is the last issue, for now.

This doesn’t mean we expect we’ve seen the end of the largest ramifications. Rather, it is an acknowledgment of a newscycle that is de-accelerating to a point where the changes are no longer so significant on a weekly basis. We appreciate your readership and thoughts on what we’ve put together. You can see our entire Crisis Digest here.

To provide a more regular forum for our thoughts and recommendations, we are increasing the frequency over our email newsletter, Cognition, to twice a month. Look out for advice, thoughts and perspectives from our global colleagues in your inbox every other Monday.

View from the top

Generating the most headlines was a new security law for Hong Kong, essentially doing an end-run around the city’s legislative body and imposing something akin to the bill that led to widespread protests in the territory last year. The dollar strengthened as investors girded for wider fallout.

A morbid sign of the relative easing of the pandemic is the increasing space in the newscycle for recrimination and reflection. The New York Times eschewed art on the front page of its Sunday edition in lieu of short tributes to 1,000 of those who died. Meanwhile the rest of the press argued about the propriety of the President golfing during a crisis.

In the United Kingdom, the long weekend was spent debating whether Boris Johnson’s chief aide Dominic Cummings should resign after a symptomatic cross-country trip away from London. The story is still developing, although his neighbors developed a rather raucous verdict on his behavior.

China held a delayed session of its main legislative body, the National People’s Congress in Beijing. The tone alternated between respect for the dead and pride in suppressing the epidemic.

The U.S. IPO market is coming back stronger and faster than many expected, with six companies filing to go public in the coming week. So far, 2020 issuances are the lowest since 2016. The NYSE will be opened once again on Tuesday, with a quarter of the staff returning to the floor with masks, observing social distancing.

Three months after announcing it would be slashing 35,000 jobs and $4.5bn in costs by shrinking its U.S. and European businesses and redirecting resources to Asia, HSBC’s board is considering even more radical restructuring changes to help the lender weather the COVID-19 crisis.

British customers will have an extra three months to skip mortgage payments, as the FCA announced the continuation of the ‘mortgage holiday.’ Along with the recent extension of the country’s furlough scheme, it’s a sign that serious government intervention in the economy will continue at least into the early autumn.

Fortune reported that Aspiration, a socially-conscious neobank, has completed a $135 million Series C funding round. Technology and sustainability are gathering more interest due to the pandemic, the company’s founder told the magazine, “this crisis is accelerating trends that were already occurring, and one of those is the shift toward digital banking.” Neobank N26 predicts digital offerings will halve Ireland’s market share with traditional banks within five years, while others see the partnership model gaining more traction.

The value of venture capital deals in Southeast Asia in Q1 2020 was down 20.6 per cent YoY, to US$2.7 billion, Singapore’s The Business Times reported. There were 105 deals closed in Q1 2020, the lowest Q1 deal count since 2015. VCs in the region aren’t in a hurry to grab a cheap deal though, expecting valuations to fall even further in Q2.

Bloomberg wrote that hedge funds are amassing huge war chests to take advantage of opportunistic investments in shared assets. (No paywall here, in the Buenos Aires Times, a publication and readership that understands the power of these particular asset managers.)

A French court has ruled insurer AXA is liable to pay two-months of lost revenue to a restaurant, opening the door for similar claims. In the U.S., small businesses are using the language of localities to strengthen their claims of business-interruption in court. The Chubb CEO said the insurance industry expects as much as $100 billion in losses.

The NHS decided not to use contact tracing apps developed by Google and Apple. The homegrown version isn’t available – despite an earlier government promise of a mid-May roll out date. Some schoolchildren will return this week without the full program available, although the government is almost done hiring a nationwide contingent of contact tracers.

Mark Zuckerberg announced Facebook Shops last week, which will be launched on both Facebook and Instagram—Shopify’s stock immediately tanked. Meanwhile, LinkedIn, always a few years behind the other social channels, announced the launch of polls. And while most social platforms are tightening their marketing belts, TikTok is investing in its first small-screen push.

We don’t think the end of the tracker will stop longtime subscriber and Cognito vice chairman Andrew Marshall from reading The Economist. This final version of the charts mirrors what we’ve seen elsewhere.

The overall percentage of the newscycle dedicated to the pandemic is falling since its peak in late March. This week stories about other issues are in the majority for the first time in months. Discussions of the longer-term impacts are slowly replacing pieces about health and short term impacts. 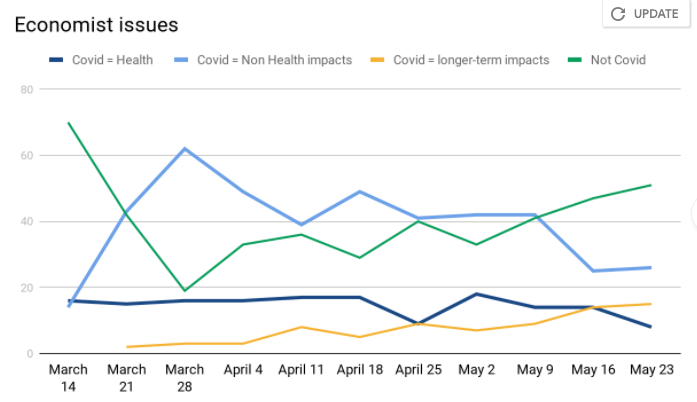 A break from finance and economic podcasts, Home Cooking is from Samin Nosrat and Hrishikesh Hirway, helping you figure out what to cook (and keep you company) during the quarantine!

‹ Previous
Stakeholder capital: how the pandemic can take us from pledges to results
Next ›
Crisis Digest #9: The next battlegrounds emerge