This week at home we braved having to see how everyone looked at Age 20 and a shocking number of conspiracy theories about Bill Gates as perpetrator of the coronavirus. (He’s not.) Meanwhile, Japan closed bars, and McDonald’s in Singapore decided to temporarily close, while selected Burger Kings in the United Kingdom reopened. Germany said schools may reopen in early May, while the U.S. is getting antsy to reopen parts of the country, and the federal government is sparring with governors over who is actually in charge.

Don’t forget about our forthcoming session on April 30 at 3 p.m. New York/10 a.m. London time with PRSA on “Managing Communications in a Time of Crisis.” Sign up now.

Despite President Trump’s predictions, the economy didn’t fully restart on Easter Weekend. When that exactly will happen, is still unclear. The Superforecasters, a collection of the world’s most accurate prognosticators, said there was the greatest probability number of COVID-19 related deaths would be between 80,000 and 800,000.

The world’s developing nations face extraordinary humanitarian and financial issues. A New York Times report on the number of ventilators in Africa shows just why outcomes are hard to predict and more suffering may be ahead. A “too little, too late” pandemic bond payout of $133 million has been triggered for the world’s poorest countries, and global investors are pushing back on the G20’s plan to halt debt payments through the end of the year for emerging market countries.

There was increasing debate about what Financial Times described as a “gap” between the ‘real economy’ and the stock market. Why, people are asking, aren’t markets down more? Barron’s wrote about the role robo-advisors – with human assistance – played in providing relative market stability during the worst weeks of the crisis.

The biggest banks in America have set aside at least $35 billion to cushion against expected loan defaults across their portfolio.

The Small Business Administration’s initial loan package ran out of money almost immediately, and was plagued with operational inefficiencies from the start. Advocates for a public banking system in the U.S. – a network of local banks holding community money instead of Wall Street – say these problems could have been avoided with a local infrastructure.

Flat is the new up for fintechs looking to raise money. Also newly popular: tools that help people save rather than spend. Here is a novel way to imagine the fintech landscape – as a tree. This comes from a dense but useful look at how to structure sector regulation.

The Economist writes this week that the pandemic will give China’s fintech sector a boost (along with the Chinese yuan) as COVID-19 forces money to migrate online and tech giants Tencent and Ant Financial ramp up their investments across Asia.

The Sunday Times writes on “what can the chancellor do to save our start-ups,” previewing the co-investment fund due to be launched – after a delay – in the UK this week that would see the government taking stakes in start-ups.

Even blood isn’t a guarantee of seeing the same way on the virus – read this piece from Laurence Delevinge on hedge fund brothers with different views of the market. Calpers, the influential pension fund, is under fire for directing Universa to unwind its tail risk strategy late last year. The fund lost out on at least $1 billion for the bad timing. Meanwhile two mutual funds in Europe with a bearish tilt reported strong March gains – Odey Swan and Odyssey funds.

Google had a busy week: waiving ad serving fees for select publishers, establishing a fund for small and medium-news organizations while indicating that they would slow the pace of hiring amid an advertising slowdown. For U.S. users, it also added a ‘Testing’ tab to the enhanced COVID-19 results page, listing local testing centers alongside other information, and extending a navigation already including information on ‘Symptoms,’ ‘Prevention’ and Treatments,’ which consolidates content from the WHO, the CDC and other authoritative sources.

In other news, Facebook users who have read or shared misleading coronavirus content will now get a pop-up pushing them to accurate information from the World Health Organization. And the social platform has responded to popular demand this week, announcing the introduction of its new ‘care’ reaction which will allow users to send a virtual hug in response to others’ posts - the first addition to the list of reactions since it was expanded from the simple ‘like’ button in 2015.

The World Bank’s pandemic catastrophe bonds have finally been triggered by the COVID-19 outbreak and will pay out $132.5m to some of the world’s poorest nations affected by the virus. However, critics are questioning if the payout will actually have any positive impact given that it has come so late.

Our vice chairman Andrew Marshall is reading The Economist cover to cover every week to keep a running tally of how many stories mention the pandemic in different ways. This week we see stories about the immediate economic/business impacts of Covid-19 again dominating. 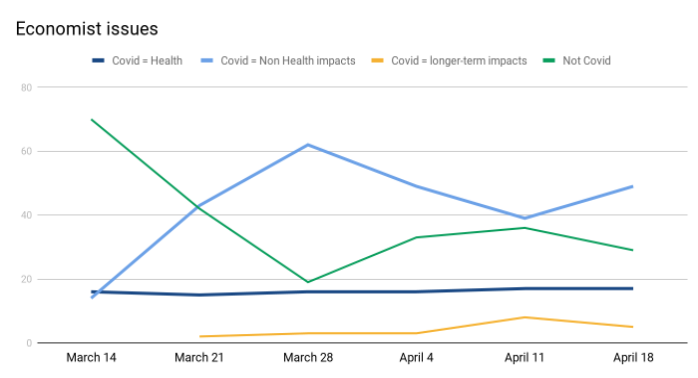 Hannah Polson looked at the changing landscape for media in Britain, which especially in the capital maintains a strong tradition of point-of-sale purchases and free dailies. With commutes on pause, publications have had to adjust.

Let’s start with the good news. Demand for reliable information has never been higher. Publishers are reporting record website visits. Some news outlets that charge for online access, they have seen a rise in subscriptions. Last month on a day in March almost 8.7m people tuned into the BBC Six O’Clock News— the highest figure recorded since Christmas Day 2008 and more than twice the average audience from last year. ITV news has doubled its ratings year on year and Channel 4 news has seen an 18% rise in viewers for its weekday 7pm programme.

Some media brands are more trusted than others. A recent Havas Media Group survey showed that the BBC is the most-trusted news brand on coronavirus, with 64% of respondents selecting it as a reliable source of information. The BBC beat Sky News, which was voted for by 29% of participants, followed by The Guardian (15%). The research also noted that nearly 50% of those surveyed said they were watching more live news since the beginning of the pandemic.

All these figures suggest that when we come through this, and we will, there may be even more ‘news junkies’ than before.

Weekly Podcast Recommendation: Over the Road

For those stuck inside, this view into America’s truck culture is a welcome escape. Not that the industry isn’t changing – the arrival of Uber and electronic monitoring are among the issues discussed – along with updates from the road in the time of the pandemic.