The possible death of Kim Jong-un threatens to overwhelm the COVID-19 response in international headlines, a first in months. The lack of concrete news hasn’t stopped rampant speculation about the Supreme Leader’s health.

Europe and the United States will begin to relax restrictions and take uneasy steps to reopen the economy, as experts fear a second wave of infection. In the week ahead, Boris Johnson is expected to end his convalescence and return to public life, while Spanish children are allowed outside for limited amounts of play.

This Thursday, April 30, at 3 p.m. New York/10 a.m. London time, join Cognito experts with PRSA for a discussion on “Managing Communications in a Time of Crisis.” Sign up now.

While the beginning of last week was concentrated on the crisis-inside-the-crisis that was the collapsing price of oil futures, that situation seems to have calmed down considerably. Not that we are soon to return to high prices or even further cuts. CNBC writes about why further supply reduction may be the only way back to stability.

The Wall Street Journal surveys equity, bond and energy markets as divergent paths may provide insight into a broader economic recovery. Economists also begin to assess the long-term fallout of sharp U.S. deficits, which are expected to reach the highest levels since World War II.

The Hong Kong Monetary Authority had to intervene in the FX market two days running last week after the Hong Kong dollar hit the higher end of its peg to the U.S. dollar for the first time since 2015. HKMA sold a total HK$4.34 billion (US$560 million) worth of Hong Kong dollars to bring the exchange rate back within a trading band and stem inflows of ‘hot money’ into the city, the South China Morning Post reported.

The BBC’s Media Show did an in-depth interview with Economist editor Zanny Minton Beddoes, which is a must-listen. The Economist is not immune to commercial pressures, she says, but subscriptions are up. She is keen to stress it is independent and not knee-jerk partisan on issues like Trump or Brexit, and doesn’t feel the need to agree with elite business opinion.

Forget about a run on the bank – the Wall Street Journal reported how customers deposited $1 trillion in banks as the crisis worsened. The result – America’s largest banks are now even larger.

Banks prepare for the next wave of PPP lending in the U.S. – forgivable loans designed to allow businesses to make payroll and prevent layoffs – with the additional $320 billion in aid expected to once again run out quickly. This time around, the SBA has included measures to prevent large public companies from withdrawing funds. We saw some signs of burgeoning provincialism, as American banks pulled back on lending to European institutions and focus on local companies. Barclays offered £750 in interest-free overdraft funds for select customers, giving additional flexibility on spending.

The biggest banks in China and Singapore announce Q1 earnings this week. While the likes of DBS, OCBC and UOB are expected to post losses of around 20%, players like the Industrial & Commercial Bank of China, China Construction Bank and Bank of China are expected to report low single digit growth, writes Nikkei Asian Review.

The gap is narrowing between fintechs and banks, as The World Fintech Report 2020 alludes greater partnership is required to meet digital consumer demand. Fintech leaders seem prepared for this moment, at least with thought leadership content, as the CEO of Ripple and TransferGo lay out their arguments.

Indonesia is one of the world’s biggest emerging markets with a thriving fintech scene. But its booming peer-to-peer lending industry could soon turn to bust, writes Mercedes Ruehl and Henny Sender in the FT. Chinese investors have been pouring money into the $5.4bn sector in recent years, but the restrictions imposed by the COVID-19 lockdown in the country, along with a government recommendation that all financial institutions defer payments on consumer and business loans, are putting fintechs under a lot of pressure.

Many large companies have announced reduced or suspended dividends. Jeff Sommer at The New York Times explores the potential impact to mutual funds, investors and the broader market.

Google required all advertisers to verify their identity – expanding an existing program. The move is partially designed to limit misinformation or scams around the pandemic. Facebook and Carnegie Mellon University launched a symptom map, designed to help chart the course of the disease, tapping into the company’s vast user base.

Don’t be a Zoom bore, broadband snob or background braggart: Zoom etiquette as prepared by The Financial Times. Is Travis Scott’s Fortnite concert the future? 12.3 million people might say yes.

Companies and their insurers are requesting carve outs or additional regulatory clarity to ensure they don’t have to pay out millions if employees returning to their jobs come down with the coronavirus. An op-ed in Insurance Business highlighted the industry’s step to waive billions in car insurance premiums as people avoided the roads.

Our vice chairman Andrew Marshall is reading The Economist cover to cover every week to keep a running tally of how many stories mention the pandemic in different ways. This week we saw a few more stories about the longer-term impacts of Covid, though still heavily skewed to near-term economic/business impacts of the pandemic. Fewer health-related Covid stories this week. 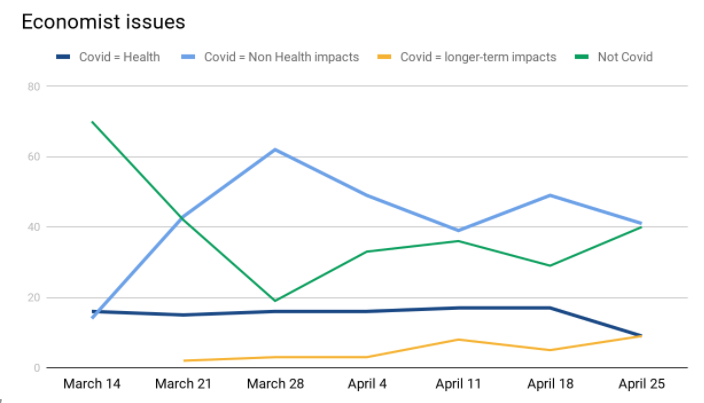 How brands can leverage sentiment data, empathy to craft Ramadan communications during the pandemic

Yasmin Ramle looked at how a holiday celebrated by billions will be different than any other previous year. It’s common in the Middle East, Europe and Asia for brands to run Ramadan-specific advertising campaigns. Yasmin looks at how those should be revised for the current climate:

Any recalibration of communications in the current context must first begin with brands putting on the lens of empathy and considering the following:

Michelle Kwok has been fine-tuning her media relations skills, even in quarantine. Here, she gives three tips for connecting with journalists during lowdown.

Amidst cancelled meetings and postponed events, we’re all having to develop new plans and make alternative arrangements. A central challenge for any PR function right now is how to keep media engagement high while most of us – including journalists – are stuck at home, away from the work-focused office environment.

In a world where everything seems turned upside down, some tactics that were standard in the past are no longer applicable. And some approaches that we previously avoided are now showing new value.

We’ve seen this transformation play out particularly in Asia over the past few months as we’ve moved from total lockdown to partial recovery in some markets. Here are three tips that we’ve learned from that experience.

‘The Journal’ is hosted by Kate Linebaugh and Ryan Knutson. This podcast is a co-production from Gimlet Media and The Wall Street Journal. In their latest episode, WSJ's Bob Davis explains how big corporations ended up getting nearly $600 million of relief money.

‹ Previous
And now for some good news
Next ›
How brands can leverage sentiment data, empathy to craft Ramadan communications during the pandemic