Some encouraging developments in Hong Kong this week: our colleagues are returning to the office after the territory started to ease containment restrictions following two weeks of zero to single-digit daily case increases.

Elsewhere, more governments set concrete timelines and objectives for re-introducing more permissive policies on movement. New York State warned that the R rate – infections passed by a single coronavirus carrier – would need to remain well below 1.0, with plenty of hospital capacity, for easing to continue. Boris Johnson, a new father and freshly recovered from the disease, said he would lay out a plan for re-opening this week. Italy and Spain, which had some of the world’s tightest lockdowns, allowed for some non-essential businesses to open and opportunities to exercise outside.

While a common narrative is emerging around a staggered, conditional opening, some of the knottiest questions – what border restrictions will remain? How will plane travel work? – are still to be answered.

At least Singapore, France, China and the United Kingdom have early May public holidays for extra relaxation, meanwhile those Americans still with jobs continue to work.

Join the head of our Singapore office, Yasmin Ramle, for a webinar on how to “Harness the Power of Data and Empathy to Guide Your Brand Messaging During this Global Crisis” this Wednesday, May 6 at 3:20 p.m. Singapore time. Register for free here.

The Financial Times’ editorial board weighed in on banks’ role in this crisis – remaining the primary channel of credit for a struggling economy, backed up by government guarantees when necessary. But ‘legacy loans’ should remain solely in banks' domain. CNBC looked at how the lives of traders are changing in both the United States and Europe, and what’s likely to continue even after pandemic begins to abate.

Bloomberg has published a comprehensive update on the ongoing challenges of the SBA’s PPP, highlighting uncertainty over loan forgiveness terms and the approval process.

The Economist looks at emerging market debt as the next likely stage of the economic storm - lower oil and commodities export income is now a major problem, but debt stress levels and market access are very mixed across larger EM economies.

The FT’s Asia Tech correspondent, Mercedes Ruehl, believes the Covid-19 pandemic could usher in a 2.0 era in fintech, fuelled by innovation spurred by changing consumer behavior and new regulations across the region.

New funding and the closing of investment rounds were announced, typically with boast that this happened amid an industry slowdown. Financial management app Snoop raised more than £3 million, while much larger and older app Stash raised more than $110 million in its Series F fundraise.

It’s the beginning of a new month, which means leaks and disclosures about which managers successfully rode the waves of the market. Bill Ackman’s main fund gained 12 percent, while the Financial Times reported that this year’s hedge fund class was proving more resilient than those that opened in the middle of the Great Recession. Not everyone was celebrating, as Reuters reported David Einhorn’s Greenlight Capital down more than 20 percent for the year.

The Oracle of Omaha held Berkshire Hathaway’s annual investor conference, where he addressed the company’s record $50 billion in losses and his optimism for America. Andrew Ross Sorkin reads between the lines of optimism and analyzes Buffet’s more realistic outlook.

The crisis is turning into an opportunity for large technology firms to get even bigger, according to a report in the Financial Times. Google's parent company Alphabet announced the business saw a 13% growth for the quarter, but warned that the pandemic-led slowdown in advertising was “sudden and significant.”

Social video app TikTok had ‘the best quarter ever for any app,’ as it was downloaded 2 billion times globally on the App Store and Google Play. This comes on the heels of many, many silly dance challenges.

The new LinkedIn messaging system adopted speedier data-storage mechanisms to keep up with the real-time nature of instant messaging. It also has more sophisticated search technology to enable easy hunting for older messages.

Broker Willis Towers Watson estimates that general insurance losses from Covid-19 could be between $32 billion and $80 billion across key classes in the US and UK, surpassing claims from the 9/11 attacks.

A new lawsuit filed in California this week seeks to use a claim by a nonprofit focused on fighting anti-semitism on whether insurers will be on the hook for “business interruption” coronavirus claims totaling potentially hundreds of billions of dollars.

Our vice chairman Andrew Marshall is reading The Economist cover to cover every week to track how many stories mention the pandemic in different ways. This week saw a bounce back in health-related stories, with a slow shift as well towards coverage on the longer-term impacts of COVID. 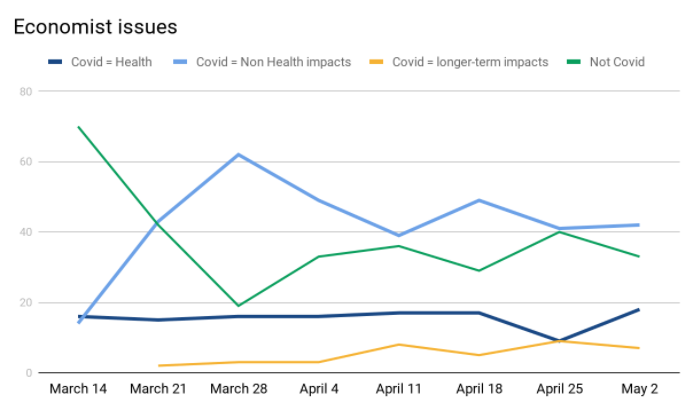 With the cancellation of the largest global event for banks, Andrew Marshall looks at how the move shuffles the decision-making calculus for marketers as they plan the rest of the year.

Listen to clients and re-research your audiences, especially your senior buyers.  Their behavior may have changed more in the previous six weeks than the previous six years. Spot how their digital footprints are evolving, and think about using social attribution tools in your marketing funnel. Listen to clients, but recognize they are not going to give you all the answers at present. They are also trying to work things out.  Don’t let lack of firm client feedback lead you to inaction! A hyper-digital marketing world gives data a major role, but in B2B don’t let data overwhelm common sense. Work out what data works for you and how you mesh it with understanding of your most important audiences.

Spread your campaign sensibly. Physical Sibos concentrates a huge amount of marketing activity into a week (which means some get overshadowed). You can now spread that over a number of months, but that means starting right now and keeping to a flexible plan.

Content continues to reign. Road test your thought leadership content with external parties to see what is credible. Use some consistent methodology: can your company or category be perceived as credible on this content; does it beat the “so what” factor; and does it relate to client pain points and ultimately your service offering? An additional simple test is whether the FT, or your leading trade outlet, would give this editorial coverage – if not, is it really going to stand out as content on an owned or shared channel?

And now for some good news

Kirsty Howe looks behind the steady drumbeat of negative, glum headlines towards some burgeoning efforts to highlight more positive news.

Finding “good news” stories isn’t easy at the moment. The silver linings, and survivor stories, are inspiring, but it can help for our own sanity to take a break from the general news cycle in favor of something more uplifting.

A number of outlets have shared various versions of a good news roundup, The Guardian’s aptly named ‘The Upside’ along with the Telegraph aim to balance the downbeat headlines with a positive weekly summary. American actor John Krasinski has also led the way with his #SomeGoodNews, a news network for good news via YouTube. Apple News, a service now used by millions globally, has a weekly roundup of good news for subscribers.

It’s easy to criticize these efforts as overly saccharine, pandering to a public that’s too immature to handle reality. I find that view naive. No one, not even Jim from The Office, is suggesting this is people’s only source of news. Rather with entertainment options curtailed from the lockdown – and the sometimes building stress that comes with months indoors – it’s perfectly acceptable to add some comfort food into a news diet.

The Economist Espresso is a daily morning news briefing from the editors of The Economist. Delivered to smartphones before breakfast, it’s a ten minute look at the global agenda for the coming day. Espresso summarizes the latest news and highlights the most important stories of the day ahead in business, finance and politics.

‹ Previous
Your first meeting post-lockdown: the view from Hong Kong
Next ›
Filling a Sibos-sized hole in marketing plans